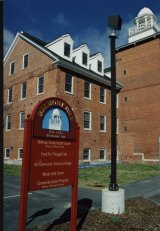 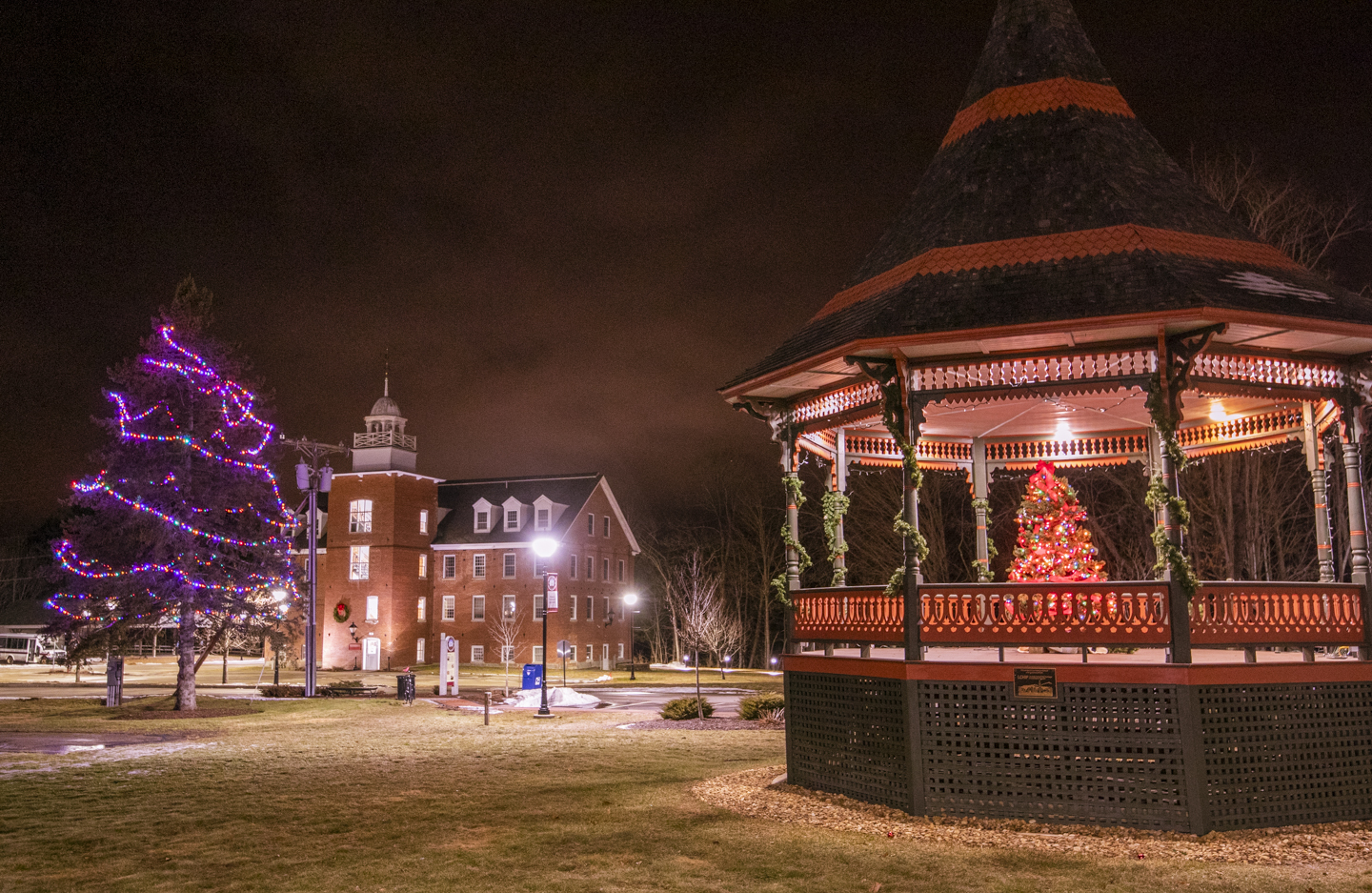 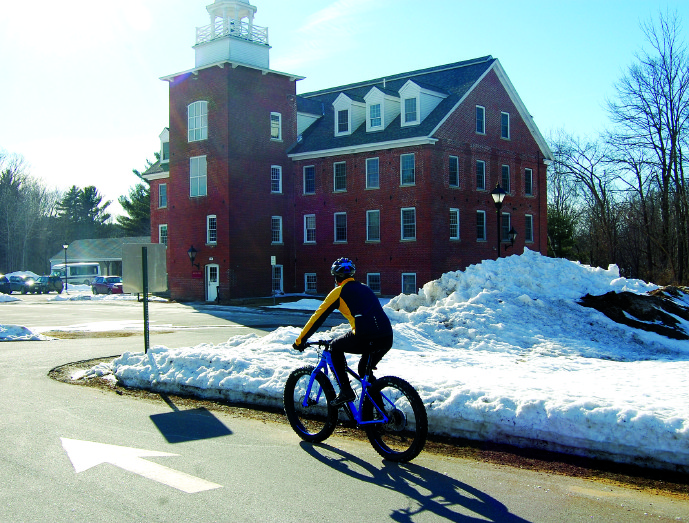 Voters opposed the demolition of the historic Belmont Mill building on March 16, but the fate of the four-story landmark remains unclear  Vote on Belmont Mill Fuels broader review of historic properties

A bicyclist passes the historic Belmont Mill, where medical and senior services are located. A town committee will take up the charge of studying the building's potential as town offices. (David Carkhuff/Laconia Daily Sun)

December 5, 2016
The Belmont Board of Selectmen held a public input session on Monday, December 5, 2016 at the Corner Meeting House to seek input on the Mill and its future specifically their intent to bring forward to the voters a warrant article to restore the masonry on the building.  Minutes

May 5, 2015
The Belmont Board of Selectmen held a public meeting on May 4th. Thank you to all of the people who attended and the comments and information you shared.  Information on this meeting as well as continuing news can be seen as it becomes available on this page.
70 residents answer call to discuss & debate future of Belmont Mill   Daily Sun 5/6/15
Appeal lost   Citizen 5/7/15

What's Next for the Belmont Mill?

The Belmont Board of Selectmen will hold a public meeting on Monday, May 4, 2015 beginning at 7:00 p.m.to discuss "What’s Next for the Belmont Mill”. We look forward to seeing you there; your input on the Belmont Mill is important.  More...
Future of Belmont Mill to be topic at Monday night meeting at BHS Daily Sun 5/1/15

Ballot Question #3.  Shall the Town vote to raise and appropriate the sum of Three Million Three Hundred Fifty Seven Thousand Two Hundred and Fifty Dollars ($3,357,250) for the purpose of renovating the Belmont Mill for use as Town Offices, and to authorize the issuance of not more than $2,957,250 of bonds or notes in accordance with the provisions of the Municipal Finance Act (RSA 33) and to authorize the municipal officials to issue and negotiate such bonds or notes and to determine the rate of interest thereon; the balance of funding for the project ($400,000) to come from the Municipal Facilities Capital Reserve for which the Selectmen are agents to expend. A 3/5 ballot vote required. (The Budget Committee recommends $3,357,250 and the Board of Selectmen support this recommendation.)

Belmont Board of Selectmen
Presentation on Renovation Proposal

In January of 2013 the Town faced structural and other issues with the Mill and began a two plus year investigation of the needs of the building and tenants. There resulted a repurposing proposal which intended to relocate the Town offices into the Mill.  That proposal was turned down by voters at the 2015 Town meeting. Background follows.

November 21, 2015 Citizen Photo & Content Michael Weiss - For 182 years, the Belmont Mill has been the heart and soul of commerce in Belmont and now it's drawing acclaim after having been been added to the New Hampshire State Register of Historic Places. The New Hampshire Division of Historical Resources announced earlier this week that the mill, built in 1833 and a key supplier to Belmont’s economy for much of the 20th century, has been added to its list of historic properties. The Belmont Mill is the third landmark in Belmont to be recognized by state or federal authorities and joins the Belmont Public Library and the Province Road Meeting House, said Linda Frawley, chair of the Belmont Heritage Commission. "Belmont’s put a great deal of effort and care into the revitalization of the village area,” said Candace Daigle, Belmont’s Town Planner. "This designation is an important factor in that.” Daigle praised the work of the Belmont Heritage Commission, which was founded in 2004, as having largely spearheaded the Belmont Mill’s renovation process. "The Heritage Commission is very active in village preservation,” said Daigle. According to the Heritage Commission’s website, Belmont NH Heritage (belmontnh.homestead.com), the Belmont Mill is 80 feet long, 40 feet deep and is built on a granite foundation. It was constructed in 1833 by the Gilmanton Village Manufacturing Company, with the ownership of the mill changing periodically for decades while remaining open for business until 1970. "It’s certainly a building with a storied history,” said Frawley. In 1992, a fire broke out in the mill, causing what Frawley referred to as "a horrific mess.” State Register of Historic Places adds Belmont Mill. The Mill was acquired by the town of Belmont in 1995, where it was in danger of demolition, she said. However, thanks to the efforts of Belmont citizens, and in particular Wallace Rhodes, who is now the Town Historian Emeritus of Belmont, the mill was saved and restored, Frawley said. Since then, the Belmont Mill has received numerous awards from historical societies across New Hampshire, including a Preservation Award from the Victorian Society in America/New England Chapter, she said. Frawley quoted a New Hampshire historian named James Gavin, who spoke of the Belmont Mill as "a monument in the preservation history of New Hampshire.” Eileen Gilbert, director of the Belmont Public Library, called the Belmont Mill "a great piece of work that shows the dedication of the Belmont Heritage Commission.” A warrant article calling for its renovation was overwhelmingly defeated by Belmont voters in March. The proposal called for $3,357,250 to refurbish the mill building and moved town hall offices there. Of that money, $2,957,250 was to be raised through the issuing of bonds and another $400,000 would have come from the Municipal Facilities Capital Reserve.

The Belmont Mill is one of seven properties statewide which have been added to the New Hampshire State Register of Historic Places.

Built in the 1830s and a central economic fixture in Belmont well into the 20th century, the Belmont Mill is the only surviving building associated with the Gilmanton Village Manufacturing Company; it serves as a reminder of manufacturing's importance in the town's economic development. After a 1992 fire, community efforts to save the building resulted in a 1996-98 renovation.

Its listing follows the initiative of the Belmont Heritage Commission, which culled research and records acquired by Town Historian Emeritus Wallace Rhodes over the years, the professional assistance of architectural historian Mae Williams, and approval of the Belmont Selectboard to include the municipally owned building on the State Register.

For Belmont, it is the third landmark recognized by state or federal officials. The Province Road Meeting House owned by the Belmont Historical Society, with a recently rehabilitated exterior funded with support from the Land and Community Heritage Investment Program (LCHIP) was the first community landmark listed on the NH State Register in 2002. And the Belmont Public Library was distinguished with inclusion on the National Register of Historic Places in 1985. The Mill has been honored for preservation, rehabilitation and its 1998 adaptive reuse by the Victorian Society of America, New England Chapter among others. In 2011 the New Hampshire Preservation Alliance included the 1830s structure in its 25 "Milestone Preservation Projects" of a quarter century.
Historic properties added to state register   Union Leader 11/22/15
State Register of Historic Places adds Belmont Mill   Citizen 11/21/15
Belmont Mill added to state register of historic places   Daily Sun 11/18/15
NH adds three historic sites to state register   Concord Monitor 11/18/15
Libraries, 1-room schoolhouse, theater join historic places   Associated Press 11/18/15

The Historic Belmont Mill is among a distinguished list of 25 of New Hampshire's greatest preservation achievements of the past 25 years, unveiled April 8th by the NH Preservation Alliance (NHPA) at its 25th Anniversary Conference. "All 25 Milestone projects exemplify themes of leadership, creativity, tenacity, and community and economic benefit," according to Jennifer Goodman, NHPA Executive Director. 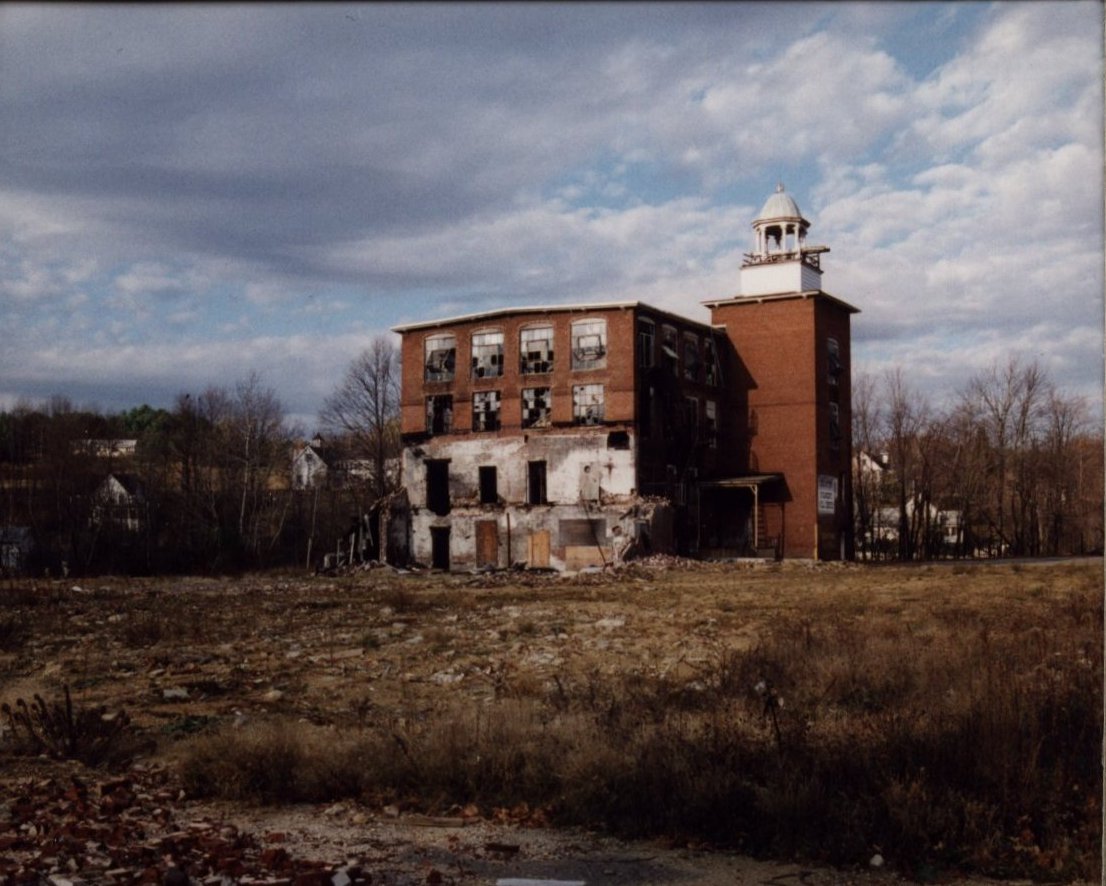 The existing Belmont Mill facility, owned by the Town of Belmont, was the subject of the first Plan NH Charrette in 1996 to determine whether the Belmont Mill, ravaged by neglect and a massive 1992 fire, could be adapted for public reuse - or if the demolition already underway, should continue. 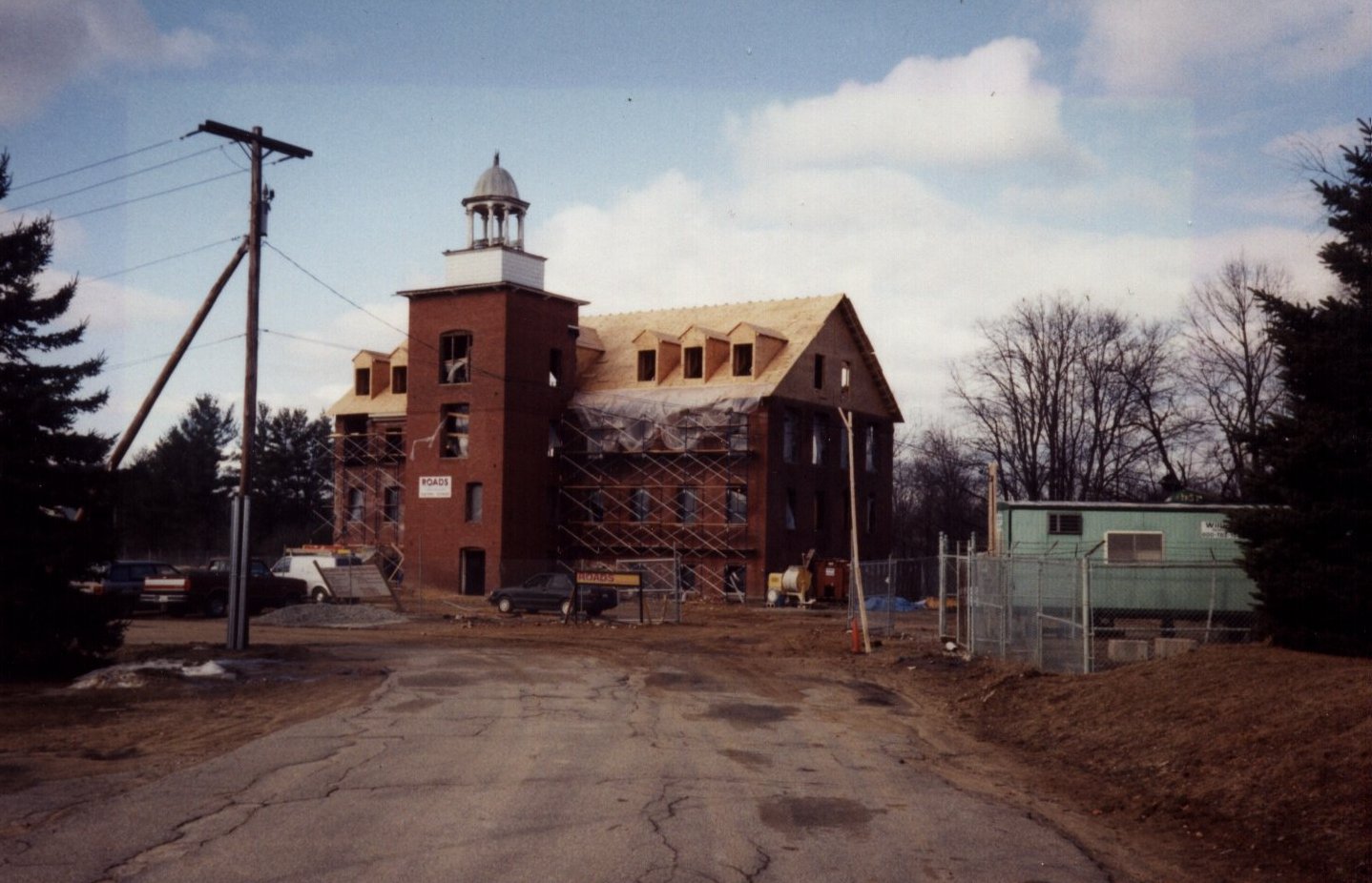 The effort proved an engaging epiphany, and in August 1998, the 1833 Mill was proudly rededicated. Journalist and local native Roger Amsden, termed it "The Miracle on Mill Street", and a NH Division of Historical Resources official said, "Belmont had regained the heart and soul of its town". Today's mill in the historical village stands as proof of the possibilities when visionary planning and community consensus are combined.  2010 Charrette

Below are news articles from 1995 through 1998 highlighting the process whereby citizens were successful in saving this historic icon.

The original power house and stack were not damaged in the 1992 fire and were left intact during the Mill structure reconstruction.

In 2001, three years after the rededication of the Mill structure, the remaining power house and stack were demolished.

In 1833 William Badger, in association with others, organized the "Gilmanton Village Manufacturing Company" and the following year constructed the Mill complex for the purpose of spinning cotton and weaving cotton sheeting.  The mill stimulated the construction of a much enlarged village and proposered until 1852 when a flood resulted in severe monetary losses.  Governor Badger died a few months later and the mill was thereafter operated until 1909 by several owners without any particular success.  Reminiscences of a New Hampshire Town

In 1909 the mill was taken over by Ipswich Mills.  In 1921, after a period of decline for Ipswich, George and Walter Duffy purchased the plant and incorporated the firm known as Belmont Hosiery Company.  In the post World War II period numerous improvements were made in machinery.  In 1955 the plant was closed and sold at auction the following year.  In 1956 Fenwick Hosiery Company purchased the mill complex and as of 1969 still employed seventy employees.  Reminiscences of a New Hampshire Town